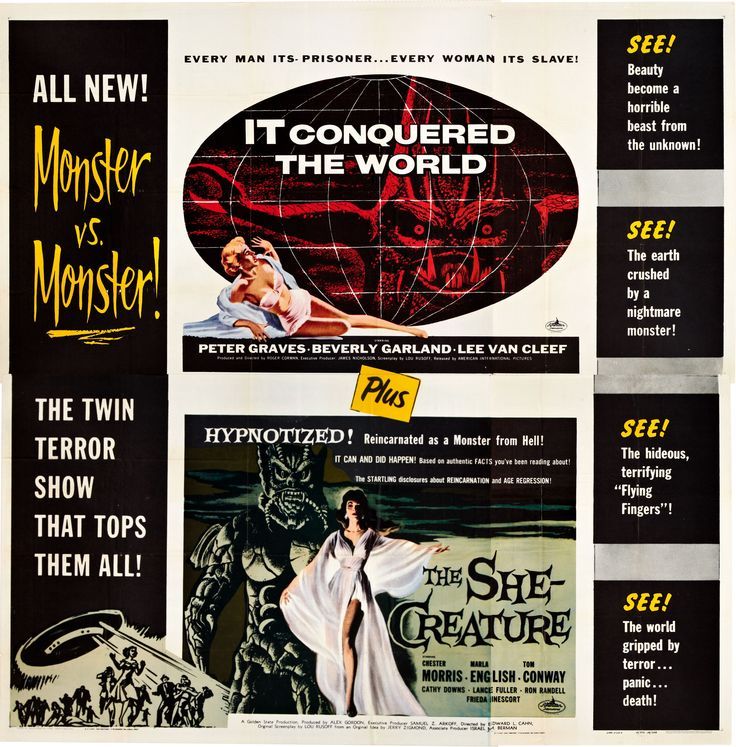 Let me tell you something, do you like monster movies? Anybody? I LOVE monster movies, I simply adore monster movies, and the cheaper they are, the better they are. And cheepnis in the case of a monster movie has nothing to do with the budget of the film, although it helps, but true cheepnis is exemplified by visible nylon strings attached to the jaw of a giant spider . . . I’ll tell you, a good one that I saw one time, I think the name of the film was “IT CONQUERED THE WORLD,” and the . . . Did you ever see that one? The monster looks sort of like an inverted ice-cream cone with teeth around the bottom. It looks like a (phew!), like a teepee or . . . sort of a rounded off pup-tent affair, and, uh, it’s got fangs on the base of it, I don’t know why but it’s a very threatening sight, and then he’s got a frown and, you know, ugly mouth and everything, and there’s this one scene where the, uh, monster is coming out of a cave, see? There’s always a scene where they come out of a cave, at least once, and the rest of the cast . . . it musta been made around the 1950’s, the lapels are about like that wide, the ties are about that wide and about this short, and they always have a little revolver that they’re gonna shoot the monster with, and there is always a girl who falls down and twists her ankle . . . heh-hey! Of course there is! You know how they are, the weaker sex and everything, twisting their ankle on behalf of the little ice-cream cone. Well in this particular scene, in this scene, folks, they, uh, they didn’t wanna re-take it ’cause it musta been so good they wanted to keep it, but they . . . when the monster came out of the cave, just over on the left hand side of the screen you can see about this much two-by-four attached to the bottom of the Thing as the guy is pushing it out, and then obviously off-camera somebody’s goin’: “NO! GET IT BACK!” And they drag it back just a little bit as the guy is goin’: “KCH! KCH!” Now that’s cheepnis. 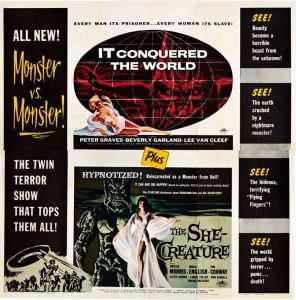